Extension of the A-30 Dual carriageway road in Murcia

The works consisted in widening the A-30 dual carriageway road, in the urban section of Murcia, between the Murcia Centro junction and the Murcia Norte junction. The works involved using the space of the existing service road in the direction of Cartagena to incorporate the third lane on this section.

In order to widen the dual carriageway road, it was necessary to set back the piers of Puente de la Estación (bridge), which crosses it perpendicularly, using the innovative system of transferring loads from the old piers to the newly built ones, minimising the impact and demolition that would have been caused by the demolition and subsequent reconstruction of the entire structure.

In the section on the Malecón Viaduct structure, the two independent structures of each lane were joined together, and the gap between them was used for the new lane. For this, the number of piles, founded with micro piles due to the limited clearances available under the existing structures, was increased.

As a supplementary action, the service road was urbanised along the entire section. All the work was carried out without affecting traffic on the dual carriageway road at any time during daylight hours. 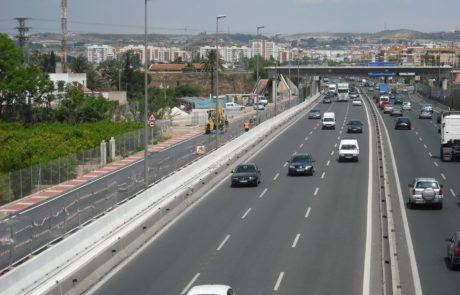